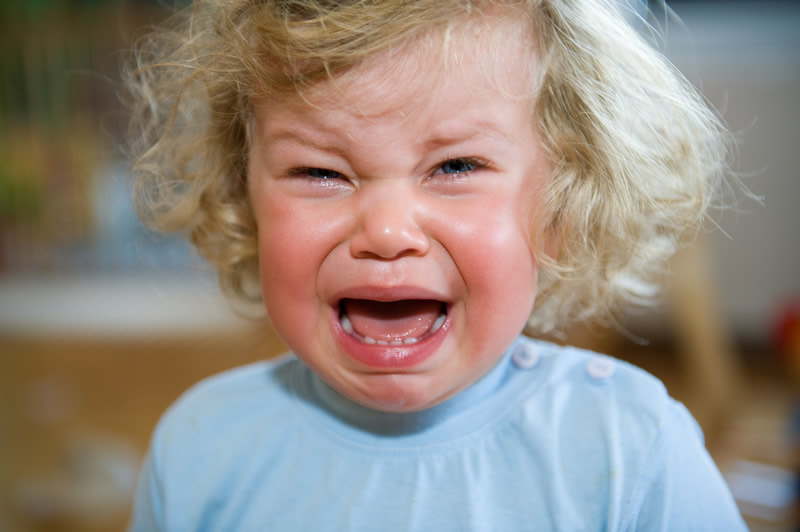 ‘She just completely loses it. There is nothing that will stop her.’

‘Do you think there might be something wrong with him? Surely it’s not normal to be doing this so often.’

‘I just said her sister could get in the car first, and she just went ballistic. I mean, it was nothing!’

‘I find that I am just giving in to her. It is just so embarrassing.

Toddlers are learning to control emotions

Every child tantrums; it’s what your child resorts to when unable to handle emotions by other means—the emotional last option. As toddlers are only just learning to control emotions, they inevitably will get it wrong sometimes. Tantrums are common between one and a half and three years of age, but they can and do go on after this, even into adulthood. I have been known to chuck a bit of a ‘tanty’ if Australia loses the cricket!

Tantrums are more of an issue if they become the only tool your child has, to get what they want. What we should aim for is teaching them other options to handle their emotions.

So, weirdly, tantrums are very much in the learning zone. You wouldn’t think your child is learning much at all when they’re lying on the supermarket aisle floor, kicking their heels into the ground, crying and screaming at the top of their voice and attracting ‘tut tut’ expressions from surrounding shoppers (don’t you just hate that?).

It’s a learning opportunity in two ways; we can learn when and why our children don’t cope with their emotions, and they can learn from us that, well, tantrums are just not a very effective tool.

Like a brewing storm, we can often see a tantrum coming. There may be predictable triggers, such as a favourite toy being taken by another child; or an activity being interrupted, like a favourite TV show being turned off. We may be able to predict high risk situations, such as when our child is tired, hungry or overstimulated.

A tantrum can almost be guaranteed after a long day’s outing in a highly stimulating environment (I remember one year with the kids at the Royal Easter Show, oh boy…).

If you want to avoid tantrums, or at least reduce them, you can try and identify and avoid these triggers and risks. If you don’t like tornados, then you wouldn’t live in Tornado Alley.

As well as reducing risk, we can sometimes dodge the storm when we see it gathering on the horizon. A ‘five- minute warning’ that the TV or video game is going off can help your child control their emotions.

We can ‘cut them a path of escape’ by offering them alternative actions rather than issuing a straight out order. Requesting your child ‘put the stick down’ rather than just grabbing it from them gives your child an option.

If we see dark clouds gathering, we can also use distraction. (eg  a favourite toy not being in a toybox as expected, and hey presto, that surprise sweet treat you bought at the shops—and was planning to give them later—suddenly appears). Another dodging technique is to ask ourselves: ‘Is this something we really need to be making a fight about?’

Effective authoritative parenting does include providing guidance and setting rules, but not all the time. If the tantrum is about an emotionally heavy issue for your child that they may well not be up to handling, such as finishing a game when they are tired, we may choose to provide our guidance at another time, and let this one go ‘through to the keeper’.

Ok, now the storm has struck. Alert, alert—emotionally non-coping child!  We have to do something very important at this time; listen, really listen. Your child is not having a tantrum because you didn’t give in to their demand (even though they think it is) but because they want to be heard.

Figure 1 – listen to show they are being heard

The way to show you are listening is to let your child talk without interruption. Wait for them to end, and don’t judge early. Use body language—squat down or sit at their level so you don’t tower over them. Lean forward and look interested, nod, and prompt them to continue. Ask them to explain, extend and repeat what they said. Then prove you have heard their complaint by reflecting back to them what you heard them say. All good, sneaky psychology stuff (very useful as a GP, I can tell you).

If you can listen past the whinge, then you (and your child) will realise what the actual nut of the matter is: the facts, rather than emotion-riddled assumptions around them. (eg ‘I hate Jenny, she always picks on me.’ Correct response: ‘Why do you say that?’  Incorrect response: ‘She does not always pick on you, and you don’t hate her. You go over there and apologise right now.’)

As well as listening, we need to keep calm (or pretend to). Sometimes this can be hard, especially if the emotionally wobbly kid is having a go at you personally. If you are having trouble with this, it may be better to give yourself a time out, rather than your child. I still need to do this regularly with my teenage children, but that’s another story.

Ok, assume we have moved past the point of no return and the storm is in full swing now. Kaboom! We have tears, we have shouting, we have feet being stamped and toys being thrown (hopefully all as a result of your kid and not you!). If your child is in full meltdown mode, listening is not going to work.

At this point, just as you would not go outside in a storm, you should ignore and not react. That is, wait it out.

When the storm has passed, we then need to consider what to do. Once again, remaining calm is very useful. Keep your speech clear and slow, with no negative emotional content. Even a little warmth here can go a long way. But we also need to show guidance, and stick to whatever agreements previously have been made. If a consequence is needed, it needs to be appropriate and relevant. It’s about limits, not punishments (we will discuss this more later).

It is tempting here to either go over the top with an inappropriate punishment, or to give in and reward the unwanted behaviour by agreeing to your child’s demand. Both of these paths are to be avoided.

If we want good behaviour, then that is what we should reward.

Finally, tantrums require consistency; we need to do the same thing every time, and all parents or carers (if there is more than one) need to be on the same page. We are trying to teach, and it’s hard for your child to learn when different messages are delivered at different times.